Who would have thought that our bones are not just a way of holding ourselves upright but also actively responsible for mood, fertility, memory and diabetes.

READ THIS ARTICLE ABOUT AND NOBEL LAUUREATE ‘S STUDY

In the mid-nineteen-nineties, a young French geneticist and physician named Gerard Karsenty became curious about a mysterious protein, called osteocalcin, that is found at high concentrations in the skeleton. He worked with mice that had been engineered to lack the substance, expecting to find problems with their bones. But their skeletons appeared essentially normal, he says, a result that left him “deeply depressed.”

The mice did have issues, though. Their abdomens were fatty, they had trouble breeding, and they were “stupid,” meaning “they never rebelled or tried to bite or escape,” said Karsenty, now fifty-nine years old and the chair of the department of genetics and development at Columbia University Medical Center. He has studied osteocalcin for almost two decades. While its role within the skeleton remains unknown, he has shown that the substance has wide-ranging effects on mice’s fat stores, livers, muscles, pancreases, testes, and even, as new evidence suggests, their brains. It turns out that osteocalcin is a messenger, sent by bone to regulate crucial processes all over the body. 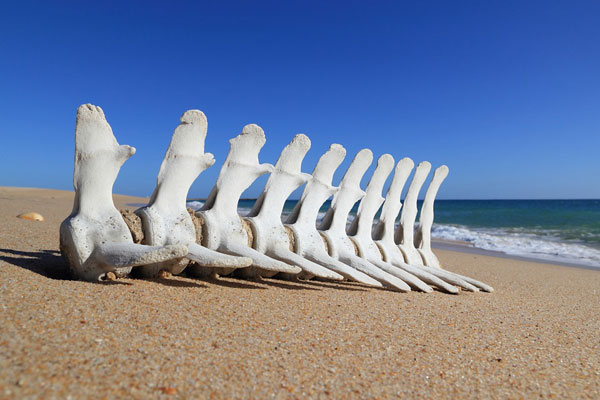 The finding represents new ground in how researchers view the skeleton: not only do bones provide structural support and serve as a repository for calcium and phosphate, they issue commands to far-flung cells. In mice at least, they talk directly to the brain. “This is a biggie,” said Eric Kandel, the neuroscientist and Nobel Laureate. “Who thinks of the bone as being an endocrine organ? You think of the adrenal gland, you think of the pituitary, you don’t think of bone.”

But Karsenty has long believed that our skeletons do a lot more than just give our bodies their shape. In 2007, he suggested that bones play a crucial role in regulating blood sugar: mice engineered to lack osteocalcin were essentially diabetic; they were less sensitive to insulin, and produced less of it. When he provided osteocalcin, however, their insulin sensitivity and blood sugar normalized. When Karsenty first presented these findings at a conference, endocrine experts were “overwhelmed by the potential implications,” as one of them told me at the time.

Similarly, Karsenty has raised provocative questions about the skeleton’s role in fertility. In 2011, he showed that bones play a crucial role in male reproduction: mice that did not produce osteocalcin had abnormally low levels of testosterone and were sterile. Mice that produced high levels, on the other hand, had more testosterone and bred more frequently. (The mechanism did not appear to be relevant to females.)

The most recent finding concerns the skeleton and the brain. In a paper published in late September in the journal Cell, Karsenty showed that bone plays a direct role in memory and mood. Mice whose skeletons did not produce osteocalcin as a result of genetic manipulation were anxious, depressed, and almost completely unable to master a test of spatial memory. When Karsenty infused them with the missing hormone, however, their moods improved and their performance on the memory test became nearly normal. He also found that, in pregnant mice, osteocalcin from the mother’s bones crossed the placenta and helped shape the development of the fetus’s brain. In other words, bones talk to neurons even before birth.

What might this chatter mean for human health? As we age, our bone mass decreases. Memory loss, anxiety, and depression also become more common. These may be separate, unfortunate facts about getting old, but they could also be related. “If you ask physicians the best things to do to prevent age-related memory loss, they’ll say exercise,” Kandel points out. Does exercise help partly because it works to maintain bones, which make osteocalcin, which in turn helps preserve memory and mood? (Karsenty speculates that a higher bone mass means a greater capacity for osteocalcin production, though this has yet to be established.) Even more fantastically: Would it ever be possible to protect memory or treat age-related cognitive decline with a skeletal hormone? These are the kinds of questions that can spur either false hopes or imaginative leaps.

Karsenty’s vision of the skeleton as central to energy usage, reproduction, and memory has persuasive evidence in mice. If one of these studies “had come in isolation, I think I would have more skepticism toward it,” Sundeep Khosla, of the Mayo Clinic, said. But they’re “part of a whole series showing that bone helps regulate other tissues, and the findings in mice are well done and compelling.” (Much of the earlier work has also been corroborated by other labs, also using mouse models.)

The question has always been the extent to which these results translate to people. “I don’t know of any hormone that functions in mice but not to some extent in humans,” Thomas Clemens, of Johns Hopkins, told me in 2011. Still, osteocalcin is clearly not the only substance that regulates blood sugar or male fertility or cognition, and its relative importance may be different in people. In mice, no other substance can compensate for a lack of osteocalcin when it comes to these functions, as Karsenty’s work shows. Is the same true in humans?

One tantalizing hint comes from men who are unable to respond to the hormone as a result of a genetic mutation. Karsenty has identified two such men, and they are both infertile and unable to regulate sugar normally—what the mouse models would predict. The real test, however, would be a clinical trial in which researchers identified patients with a genetic defect related to osteocalcin—or patients with low levels of osteocalcin, perhaps as a result of declining bone mass—and treated them with the hormone to see whether it reversed low fertility, poor memory, anxiety, or depression.

Karsenty also believes that we know enough now to recognize that the body is far more networked and interconnected than most people think. “No organ is an island,” he likes to say. And if X talks to Y, then Y should talk back to X. This insistence on reciprocity has animated much of his career, with the skeleton often playing a surprise role: insulin acts on bone, and bone should help regulate insulin. Testosterone has an influence on bone mass, and the skeleton should act on the testes. And just as the brain talks to the skeleton, he says, “I always knew that bone should help regulate the brain. I just didn’t how.

← What is Muscle Soreness?Attention all coffee drinkers…. →